I have a very special person in my life.  He has been by my side and supported me through so much, as I have tried to do for him as well (although I think he can say he has dealt with more 😉 ).  He has taken a place in my heart and there he stays.

When I went to see him at the end of October, it was like I had just seen him, yet it felt like it had been forever! You know what I mean?

When he visited me last, he was going through the loss of his mother, the one person that had always been there, had looked after him and in turn, he looked after her until her passing.  I cannot imagine and don’t want to imagine.  I know it will come one day and I am not wanting it to.  My parents mean so much to me!

But during this time, he was lost.  He knew where he was, but he was numb to all around him.  He was not himself and all I could do was be there for him, as he has always been there for me.  As a matter of fact, just today he told me he didn’t realize how out of it he had been during that time.  From what I understand that is normal and it can definitely be worse.

So, when I saw him in October, he was getting back to himself.  We went to see his personal assistant get married at a quaint farm where they were using the barns as entertainment/wedding venues.  We went and saw friends in London and went over to Rotterdam for a few days to see friends.  As I said, I am blessed.  The scenery in Rotterdam was amazing and beautiful depending on where you went.  (I am sharing a few pictures I took at the top of the page.)

He is now here visiting for a couple of weeks and is more himself than even when I went there to see him.  I am so happy about that.  I am trying to make sure he sees things he hasn’t yet and is enjoying himself while he is here.  We have so much fun together!

Anyway, I just wanted to share a bit about him and hopefully if he reads this he will see and know how much I appreciate him and I thank him for being there and always having my back, supporting me through it all!

Photo by Matthias Zomer from Pexels

Did you ever think about how traveling can help you deal with grief or loss?  I didn’t!  If you are looking for a way to deal with grief or loss, take a listen to Memento More. How Travel Can Help Us Deal With Death and Grief with Dr. Karen Wyatt.  It is a very interesting podcast called Books and Travel by Joanna Penn.  It is good information on how traveling can help.

So, I recently had my second trip to London to see my friends and it took me a bit to get my writing together on it.  It was a couple of weeks and I tried to see and visit places and people but was not able to do all I wanted to.  While there I was able to take a day, Friday to be exact, and was taken on a tour to Notting Hill and Portobello Road.  It was amazing the history and stories to be told about that area and why it has become how it is today.  My wonderful historian friend helped me with the facts so some of the things I have shared are in her words.

We started by meeting at Pembridge Road, right by the Notting Hill Gate Underground tube and we went from there towards the Portobello Road, parallel to Ladbroke Grove. 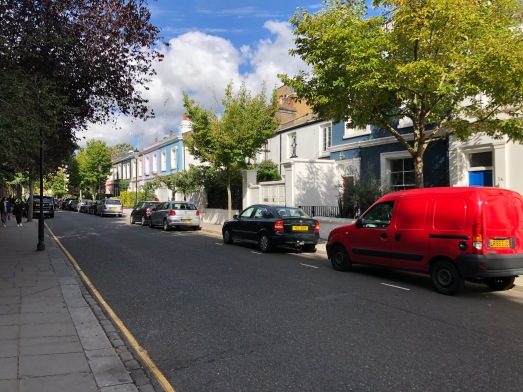 You could just feel the change in energy once we hit Portobello Market.  Walking by the Electric Cinema, The Duke of Wellington and the Earl of Lonsdale pubs (among many other pubs), seeing the antiques market, the food stalls, the vintage stores,  you get a very real sense of history unfolding before your eyes.

From what I understand, in the mid 1800s Notting Hill area became more residential where large homes were built, for the emerging middle classes as people began to move westwards, out of London. Fancy Notting Hill used to be an area that serviced the richer families and was once primarily known for its pigs. Locally, it was known as  The Piggeries because there was a ratio of 3 to 1 pigs per person. Because of rapid over development the large houses later were split up into smaller rented dwellings. They were eventually populated by Afro-Caribbean immigrants brought over to Britain after WW2, to help rebuild the country. However, racial tensions arose, spurred on by the Mosely fascists, and in 1958 a race riot broke out. Later, in the 1970’s, racial tensions would arise again as a response to heavy policing and economic deprivation. But since the 1980’s the area has gradually gentrified and the rioting impulse has faded.

The Notting Hill Carnival is now one of the world’s largest street carnivals. It arose out of local actions. In the 1960’s, the area was still filled with bomb sites and it was a desperately poor place to live.

Wanting to give the children in the area a safe place to play, the residents (including musicians, activists, hippies and local families) developed their own adventure playground and (illegally) opened up previously locked and unused parks.  To celebrate the opening of the parks and the adventure playground, they held a party. Given the large Caribbean population, it wasn’t long before the steel drums came out and a joyful street parade began. This was 1966 and the start of Europe’s largest and most exuberant street party. 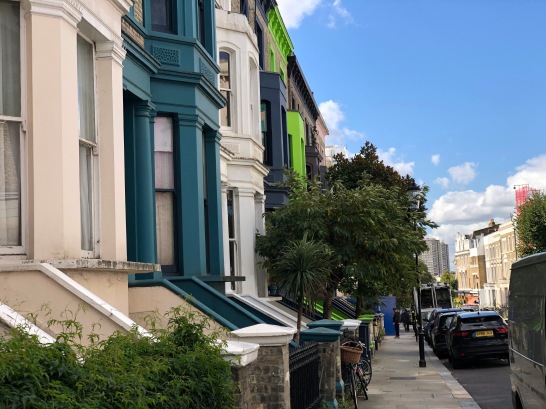 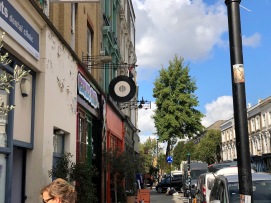 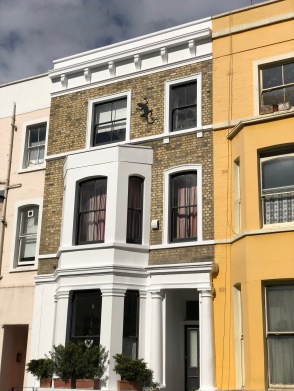 As we walked from the park area and back toward Portobello Road, we came across what was originally a waxwork/drapers’ models factory, later a church. Then Basing Street Studios (1966), then Sarm Studios with bands like Bob Marley, Exodus and Punk bands. It was also where the song “Do They Know It’s Christmas” was recorded where all sorts of famous artist came together in one place.

In the late 1960s the building became the offices and studios of Island Records.  At this stage the Island label specialized in folk and prog rock.  Led Zeppelin began recording their fourth album, including ‘Stairway To Heaven’, in the newly opened Island studios in 1970.

Around 1972, Bob Marley turned up on Basing Street, when he was staying in Neasden after touring with Johnny Nash. Chris Blackwell proceeded to sign the Wailers to Island for their major label debut, the Zippo-sleeved ‘Catch A Fire’, which was remixed and promoted on Basing Street as the first rock-reggae crossover album.  For some time Bob lived above the Island studios and his wife Rita of the I-Threes was a Basing Street resident for several years.

In the mid 80s the Island recording studios at 8-10 Basing Street became Sarm West, the HQ of the ZTT label of Trevor Horn and Paul Morley, who brought us Frankie Goes To Hollywood’s ‘Relax’ single, ‘Frankie Say Relax’ T-shirts, Propaganda and Art of Noise.

Some great names have gone through the studio on Basing Street.  Unfortunately, it is, like much else of west London, being converted into luxury apartments.

Once we reached Portobello Road again, after viewing where the park was located, we continued on through the market traders and their wares, stopping at some to check out what they had.  The market continued on down to where there was a school and across the street from the school, on the sidewalk where more of the market traders were, were paintings on the wall of the history of the area.  It was wonderful to see.  From there, we went back the way we came.  I was so overwhelmed by all that was offered from the traders, I ended up not purchasing anything.  Crazy, I know, but I just was so overwhelmed, I couldn’t.  Hopefully there will be another time for me to do so.

I hope if you ever get to go and experience Portobello Road and Notting Hill, you will, and can come back and tell me what you came away with yourself.  What a great experience that was!

*All Pictures taken by me except the last one, and that I posted where it is from under the picture*

Oak is winemakers’ salt. Used correctly, it can increase the intensity and complexity of wine, add attractive flavors, and elongate the finish. When it comes to “seasoning” wine with oak, winemakers have several options — and very different intentions. In white wines, oak can impart notes of vanilla, butterscotch, and caramel; in reds, oak adds…

via All the Ways Wood Affects Your Wine, Explained — VinePair

*Updated with corrected info. (knew I would get some wrong…a lot actually)  🙂

I will not ever forget the sights in London.  Just walking around the area I was staying in was amazing.  The old feeling of history surrounds you.

Then you go into the West End of London and feel both the old and the new meshing together and making you feel as if you are in a whole new place.

I had a friend give me a guided personal tour of London.  We walked from one side of the Thames to the other and back again. 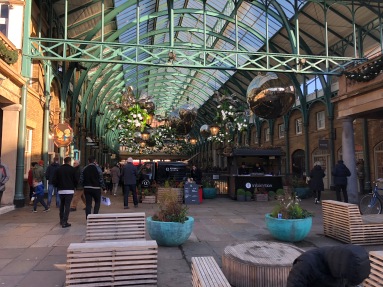 As we are driving into London from the west, along the A40, we go over Notting Hill, through Paddington and past Regent’s Park.  We however, started our tour on foot just down from and walking through the West End and Covent Garden.  There we walked past the Royal Opera House and Portland House (original home of the BBC), seeing the shops and entertainers as we go by.  There we also saw the Theatre Royal Drury Lane. 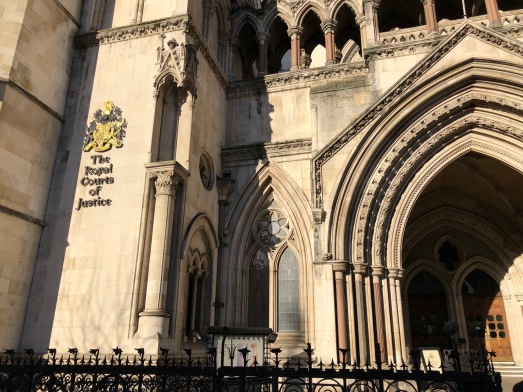 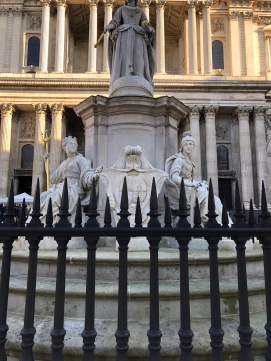 We walked along The Strand past the Royal Courts of Justice which was pretty amazing, and believe it or not, there are still pillars of dragons and historical figures in the middle of the roadways and telephone booths throughout the area (they may not work for calls but they are still there!).  Walking along Fleet Street by the beautiful historical St. Paul’s Cathedral where the monuments, balconies and great dome were definitely something to not miss. 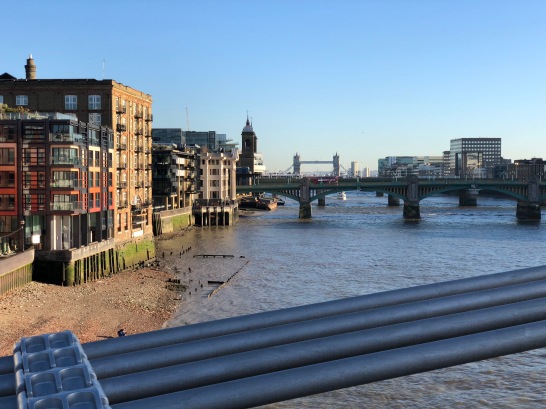 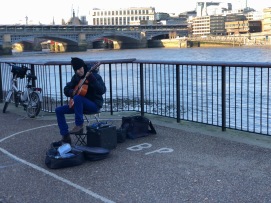 We crossed the river Thames by the Millennium Bridge (where you can see the Tower Bridge and beautiful views up and down the river) to the South side of the river where we saw and heard musicians playing as we walked past Tate Modern, along the river towards Westminster, Big Ben and the Parliament buildings (House of Commons and House of Lords). We also stopped at a quaint little restaurant and enjoyed some muscles marinated in garlic and herbs where we relaxed and rejuvenated before continuing on. 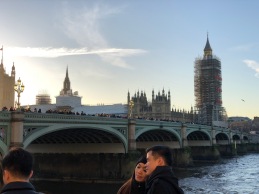 We went on toward the London Eye (an awe-inspiring sight), where the line was so long you couldn’t see where it ended.  Now we were in the midst of tons of tourist and holiday goers to get through so we could then cross the Thames once again, by the Westminster Bridge. We then walked up Whitehall, past Downing Street and Horse Guards Parade, where we saw the guards on horses and the tourist can take pictures with the horses and their riders (just don’t get too close or handle the horses or you will get yelled at by the guard! I saw it myself! Ha!). 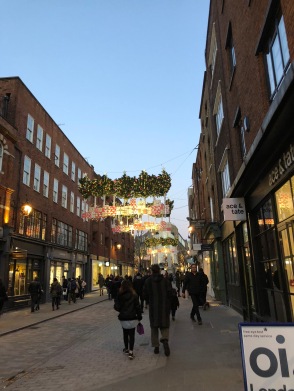 We then went on to Trafalgar Square and returned to Covent Garden where we did a bit of shopping, in a chocolate shop and fragrance shop, before the end of the tour.

What fun I had and I was so appreciative of the personal tour, but boy was I tired! I can’t wait to get back and see more!

*Picture up top off Pinterest.  Big Ben was being worked on and covered in scaffolding while I was there.

**Other pictures are my own